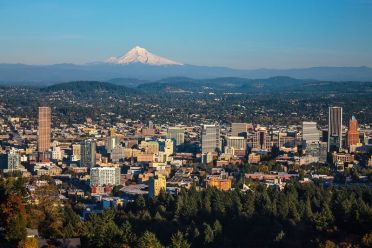 We’re proud that we were able to work with Portland City staff and officials to develop The Portland Loo, which is the name of the freestanding restrooms you can see on some of Portland’s busiest sidewalks. Of course our sustainably-minded city loves the off-grid solar-powered components! These and other features helped the city get their first patent for the design, which was devised to discourage crime with graffiti-proof wall panels and open grating. They look pretty sleek and modern too, even though the first one was installed over 10 years ago! Since then, Portland has become pretty famous for many more things you’ll likely find on its sidewalks:

In a city full of proud foodies, it’s no surprise that Portland has a plethora of food carts. Over 600, in fact.  Portland even holds the title of The World’s Best Street Food, according to CNN. Most of the food carts and trucks around town are located in groups or pods, which makes it easy to sample many culinary delights in one stop. There’s even tours that visitors (or local enthusiasts) can take to experience the full flavor of the city.

Portland is one of the most dog-friendly cities in the world, and they’re peeking out of backpacks, or on leashes, all over sidewalks downtown. Ownership is extremely high with an average of 1.3 dogs per average household. You can find a dog or two in many offices or work spaces around the city, and many restaurants will even let you bring your dog inside. It also has the highest number of dog parks per capita.

It’s pretty common to see a tourist walking around with a big pink box full of the whimsically decorated pastries from Voodoo donuts. However, Portland is fast growing with many other donut shops to choose from, including Pips Original, Blue Star, Nola, and Coco. Portland wouldn’t be Portland without animal-free options too, which you can find at Doe Donuts, the city’s first all-vegan donut shop.

Sometimes called Bike City, USA, Portland has the highest percentage of bike commuters in the country, with over 7% of the population riding to work or school. There’s over 315 miles of bikeways in the city, and bicyclists even have their own green painted lanes on many streets around town, to encourage drivers and pedestrians to be aware and travel safe. You’ll also see a lot of orange bikes parked on sidewalk stations and available to rent, which are part of Portland’s new bike share program Biketown, funded by local sportswear giant Nike. We’d be remiss not to mention the many bike-themed events that occur in the city too, including the annual Naked Bike Ride in June. Portland draws the biggest participation of any city in this global protest against oil dependency, which has a secret route and many costumed riders alongside the bare naked streakers.

Portlanders love their costumes, and they don’t need an excuse to dress up. Besides clowns, you’ll see a variety of different characters on an average day, when walking from one end of town to the other. There’s a regularly-seen Elvis, bagpipe playing Darth Vader unicycler, and even Bigfoot. From cosplay to clowns to burlesque, you’ll definitely be entertained on Portland’s sidewalks.

The zombies are growing fast in other cities too, don’t say we didn’t warn you. If you’re looking for an affordable, clean, and secure bathroom like the Portland Loo to hide in, give us a call and we’ll be happy to go over the specs with you.