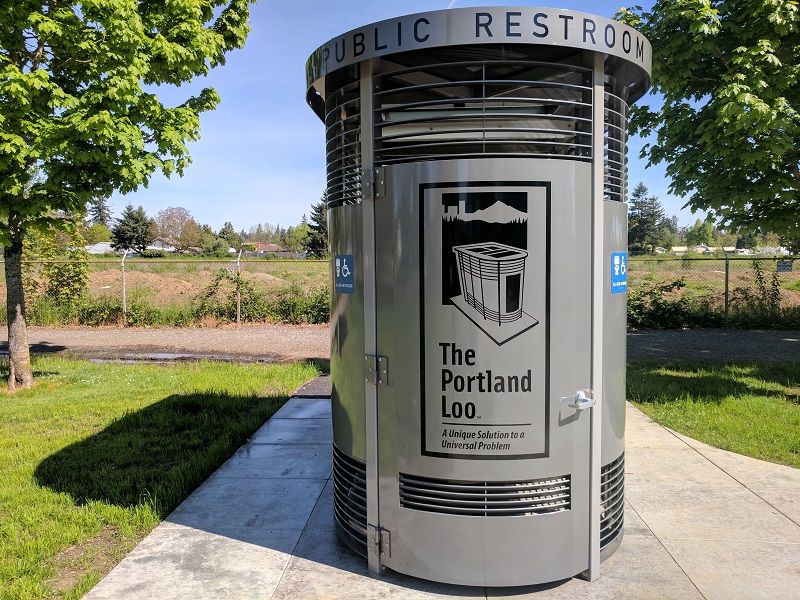 Most Portlanders are familiar with The Portland Loo, and have seen the silver rounded public restroom on several spots around town. The Loo has a unique look and a small overall footprint, allowing it to be located right on the street on sidewalks or other tight spots. But what many Portlanders may not know is that since the first Loo was installed over 10 years ago in Old Town, another 20+ cities have installed The Loo as well! Here are some of the most notable locations around the globe:

Referred to as the “Langley Street Loo”, this Portland Loo was voted Best Bathroom in Canada several years ago! The win was a victory over other celebrated washrooms all over the country and inspired several other Canadian cities to install their own Loo.

This Loo is located at Baldwin Street, which is a popular tourist attraction in the city of Dunedin, New Zealand because it’s the steepest street in the world!

This might be the coldest Portland Loo location, as Smithers often reaches as low as -25 to -30 degrees Celsius! That’s why this Portland Loo has some small modifications, such as wire in the toilet to keep the water from freezing, so that stays in operation for as many days in the winter as possible.

Galveston has five Portland Loos, which were part of a beautification project all located along the Seawall there, with outdoor showers installed in each as well!

The instillation of this Loo in Cambridge Common Park was prompted by the closure of public restrooms at a church in the area, which left little options for tourists and homeless populations.

This Portland Loo is located downtown outside the Tongass National Forest, which is the nation’s largest national forest, to offer relief during busy tourist seasons.

Cincinnati installed the loo after a political fight between two candidates who knew that the area desperately needed a solution. The Loo is located at Smale Riverfront Park, which is 45 acres of green land along the riverfront between the Great American Ball Park and Paul Brown Stadium.

There are now over 20 Loo locations in Portland as well, helping to keep the city clean and crime-free. If you’re a city in need of a durable and inexpensive solution to reducing crime and waste in your parks, transit stations, or other populated areas, join the many other cities who enjoy the The Portland Loo.