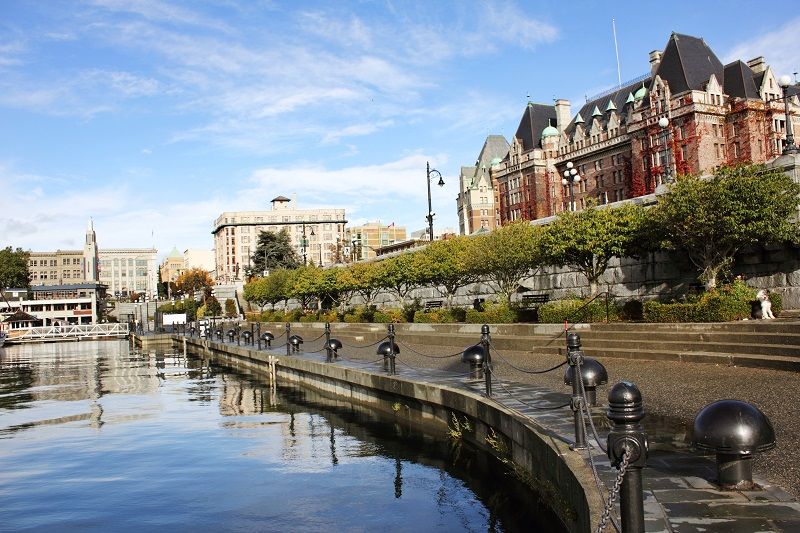 We’ve often mentioned how The Portland Loo was voted Best Bathroom in Canada several years ago due to the famous “Langley Street Loo” located just north of us in Victoria BC. Since then, several Canadian towns have installed a Loo, including the township of Esquimalt which is just a few miles from Victoria – located at the southern tip of Vancouver Island. Esquimalt is famous for its long history with the Royal Navy, and now the Canadian Forces Base remains as the township’s largest employer.

Esquimalt installed their first Portland Loo back in 2013 in West Bay Park, a little neighborhood park that has a trail that takes its travelers along about 5 kilometers from Esqimalt to Victoria BC. The Westbay Walkway, also known as the Songhees Walkway, is a nice waterfront path that locals use for jogging and strolling on raised boardwalks in places with bridges along the way. It leads you right over the water in some cases because the cliff ledges and rocky landscape requires it.

Even though the walkway has been there for quite a while, they realized that it would be helpful to put in a restroom at the trailhead – so that people have a place to go before they go! Once they got approved for the funding by the mayor and council, they put out a bid for proposals. They knew they wanted a modular or portable option, because it would better fit the smaller park – whereas a regular build would be too large, and more expensive.

The Manager of Parks & Facilities Rick Daykin said that The Portland Loo provided the most viable option, so it was easily settled! They loved how The Portland Loo had a smaller footprint – plus it was gender neutral, and able to occupy just one person at a time, or a family could use if they wanted to!

They also found it super easy to install. They simply created the foundation on a concrete platform with the proper plumbing in place, and then a crane came in to just lower the prefabricated restroom onto footings that were installed. The locals love the stainless steel look, which ties in well with the existing area, plus it’s so sturdy and easy to maintain with very little energy to keep it running.

The Loo at West Bay has a baby changing station set up inside for families with infants, and there is a water fountain with a bottle filler station and doggie water fountain all on the outside as well! It’s open from dawn to dusk, and they’re utilizing automatic electric strikes to lock the door at night.

The Portland Loo was such a success for West Bay Park, the township of Esquimalt started talking about putting a 2nd one in at Memorial Park. This is an area downtown across from city hall, so it’s an important central park. They often do remembrance ceremonies for citizens that have been in wars – so it serves as a veterans memorial area. It also has active space with playgrounds and an open area for events like farmer’s market or music in the park.

They previously had a port-o-potty at that location, which often got vandalized with graffiti and other damage. They knew The Portland Loo would stand up to that, and so the township went through the approval process to install a second Loo, which was completed this past spring – just in time for their busiest season of activities. Everyone has been so pleased at how easy they were to hook up once the plumbing and electrical was ready to go. This second Loo is also utilizing solar power, although they haven’t yet compared and measured the energy savings with the difference between it and the one at West Bay Park.

Rick says that both of the Loos in Esquimalt are really well used, and almost can’t believe how long it took them to find something better than the port-o-potty they had before. They were so anxious to get this second one at Memorial Park in use that the first flush was just 4-5 hours after it landed on the ground! There was no grand opening necessary either; they had enough excitement for the Loo already, and didn’t want to hold anyone back from enjoying the Loo.