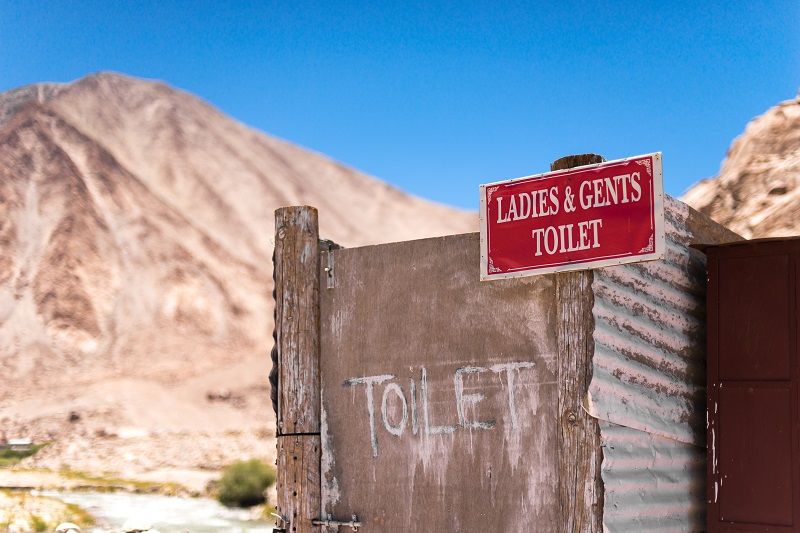 The Portland Loo was designed more for the city and less for the user, with the primary goals of keeping the city clean and discouraging crime. For example, the open grating at the bottom and top allows law enforcement and security personnel to observe how many people are inside. This gives privacy, but also allows for conversations to be heard. The hand-washing feature is on the exterior, which deters anyone from lingering too long inside the restroom washing their body or clothing. The bottom line is that the Loo is made to be a tiny bit uncomfortable, so that people do their business and leave as soon as possible. That doesn’t mean, however, we don’t want you to ‘go’ here! In fact, just the opposite. Unlike so many other public restrooms we’ve seen, it’s still private, clean and safe. Here are a few other famous examples from around the world that don’t meet that criteria, so you may want to skip it:

Okay, to be fair, this public restroom is private, but it may not FEEL that way. The Don’t Miss a Sec art installation is a concept by Monica Bonvicini, which has been installed in cities around the world, including London and Rotterdam. The enclosed restroom is walled with one-way mirrors, which allow the user to see out – but passer-bys can’t see in. However, most public response indicates that people are generally unsettled by the illusion of being caught with their pants down. Info here

This amazing unique hotel has a wide-open toilet in the middle of the NamibRand Nature Reserve. Yes, it has incredible awe inspiring views of the mountains and red sand dunes that surround… but the area is accessible to wild animals that frequent there, such as antelope, giraffe, zebra, and the leopard – so it’s not exactly what we’d call a ‘safe place to go.’ And while it might be cool to have some sand between your toes while sitting on the pot, it has absolutely no privacy. Use this restroom at your own risk! Info here

Amsterdam’s business community is hesitant to let the non-customer public use their restrooms, and peeing into the Amsterdam Canal can get you a big ticketed fee. Plus, it’s not safe! 15 people die each year peeing into the canal. Which is probably why they put in Kruls, men’s open public urinals, onto the streets. And while we certainly love the idea of having easy access to public toilets right on the city sidewalks, these curled plastic urinals might just take it a bit too far without any walls. There’s nothing wrong with a little modesty and privacy, and we’re proud that The Portland Loo provides that for the public cities that use it! Info here

Paris apparently tried to one-up Amsterdam with an eco-friendly version of the open-air public urinal concept. The idea here involves red planter boxes where locals can urinate onto planted vegetation, which have a straw layer on top that keeps odors from emanating from the boxes. Meanwhile, nutrients from the urine are captured in the dirt underneath the straw layer, which will be turned into fertilized compost. Regardless of noble intentions, locals seem to think it’s in poor taste and have complained to authorities – especially about one red planter in particular that’s located near Notre Dame Cathedral, overlooking the River Seine. Talk about holy water. Info here

Also dubbed as the ‘world’s most dangerous toilet,’ this outhouse looks like it’s barely balanced on the edge of a cliff some 8.500 feet above sea level. It’s located in the Kara-Tyurek mountain pass of Siberia, Russia, and the waste that goes into the toilet falls right down into the valley below. No joke, this toilet might just literally scare the ‘sh*t out of you! Info here

Another famous toilet is located in the high elevations of Russia mountains, being named once as the “world’s nastiest toilet’ by Outside Magazine. This restroom looks like a pile of concrete rubble sitting on top of Mount Elbrus, which is the highest peak in Russia. This area also hosts a popular ski resort which hasn’t seemed to influence them to invest in a safe and clean pit-stop. It is well-used however, because hikers who do make it to the top have likely had a lot of water on the way up. Info here

We hope that you feel welcome to ‘go’ at one of our many private, clean and safe Portland Loo locations around the world, including more than a dozen here in our hometown of Portland OR. The Portland Loo is prefabricated and self-contained, making it easy to install into any city, transit, or park, please give us a call if interested in more details.