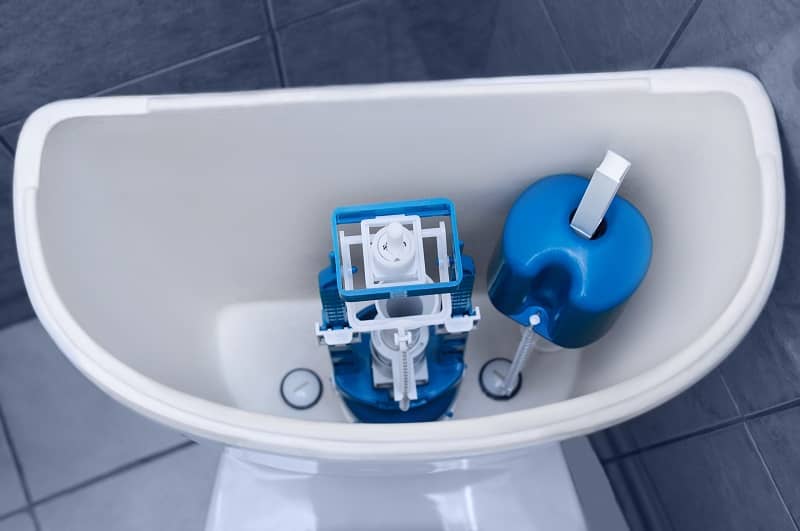 I’m sure we can all agree what a wonderful innovation that flush toilets are! They alone have significantly decreased the spreading of disease in the past few centuries – as well as keeping the smells to a minimum. But you may not realize that innovations in new toilets aren’t just about fun gadgets like lights and speaker systems, there are a variety of different types of flushing systems that make the most important part of the toilet work! If you’ve been looking at toilets and wondering which is the best toilet for your home or organization, you should also consider what kind of flush system it employs. Here’s some of the different types of systems and the advantages of each:

The oldest and simplest flush system still used today is still the gravity flush. The tank releases water into the bowl, which creates pressure to clean and empty the waste into the trapway. The water is released into the toilet bowl through small holes around the seat rim to clean the bowl, as well as through a hole known as the ‘siphon jet-hole’ which shoots water into the trapway, This creates a siphonic  vacuum effect that clears the bowl before refilling it, which helps to make sure nothing is left.  Because it has fewer parts, it’s the easiest and least expensive to maintain and repair – and it’s fairly quiet compared to other pressure systems as well.

This is probably the most common flushing system out there. The ballcock is the floating ball that’s attached to a rod inside the water tank. When the rod moves from pulling down on the flushing handle, it activates the plunger that allows the water to empty the tank into the bowl. Then as the plunger goes back into place, the water level rises and the floating ballcock rises with it to a preset level. That forces the lever to close the valve and shut off the water flow into the water tank. The flushing function is dependent upon the water level, so if it’s too low it won’t flush properly… and if it’s too high the toilet could overflow.

This is similar to the ballcock flush, with a flapper instead of a ball that’s filled with air and floats once you trigger it by the flush valve. When that happens, the flapper is pulled out of position by an attached chain and then water flows from the tank to the bowl. When the water is emptied and the level drops, the flapper no longer floats and gets back into position allowing the tank to fill again. Newer versions of this type of flush allow for a dual-system, varying the water amount for solids and fluids.

The Double Cyclone Flush system has some of the best qualities of traditional systems with some new innovations that use less water without any consumption of power! Created by the toilet company Toto, the double cyclone flush system has two nozzles (instead of using Rim holes), backed with a propulsion system that gets more water to pass through the tube. It creates a forceful siphon that prevents clogging with less water needed for each flush. Because it uses some of the gravity mechanisms, it’s actually pretty basic and simpler to repair too.

The Pressure-assisted system was developed to save water, and relies on pressure instead of  gravity the way most systems do. Pressurized air builds as water enters the tank, and then is released with force when flushed to wash the waste away from the bowl. Because it’s less prone to clogs, it’s also very easily maintained and often used in commercial settings. It’s a bit noisier than other systems but the pressure cleans it more efficiently than most.

The Washdown toilets are much more common in Europe. It’s similar to a regular siphon toilet, except that it has a bigger trapway, which makes it easier for water and waste to escape. What’s nice about this system is that it doesn’t have complicated parts because it only uses the weight and gravitational pressure of gushing water to push waste out, flushing the bowl quickly.

As you’re evaluating flush systems, we suggest you look at the needs and environment it will be placed in. For example, if you have a home with a big and busy family, you may want a system that is more powerful and empties the bowl more quickly. But if you want something that’s next to a room that you like to relax and get work done in, then you probably want to look for something that is a bit quieter. And if you’re looking for a fully constructed bathroom to keep your schools, parks, transit stations, or other city areas clean and crime-free, contact us to get pricing and find out more about the Portland Loo!