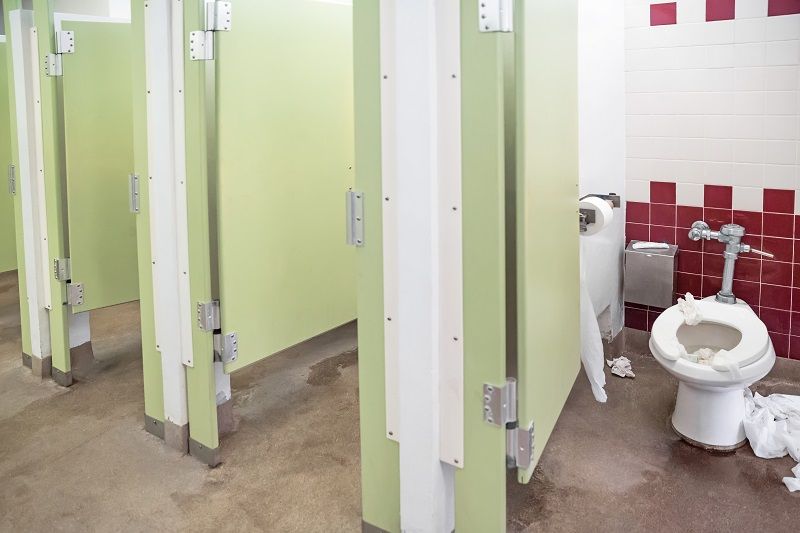 The Portland Loo is a public bathroom developed by the City of Portland, designed to keep the city clean and crime-free. With over 18 locations around Portland, plus many more around the world, it serves many different folks in the community – from runners to downtown shoppers and tourists to the homeless population. Because it’s a standalone single-occupant bathroom, it’s naturally gender-neutral, and can also accommodate families with room for parents to accompany their children to the restroom. With all this traffic into the Loo, it’s more important than ever to do your part to help keep the city clean and crime free with proper bathroom etiquette. Here are some of the basics that we recommend in the Loo and any public bathroom around town:

Don’t Leave Pee on the Floor or Toilet

Men stereotypically pee on the floor, and women on a toilet seat. Whether you’re in a gender neutral bathroom or not, it’s polite to make sure your pee stays inside the bowl! If for some reason you splash some on the seat or the floor, be a good citizen and clean up after yourself! And if you’ve heard that it’s more sanitary to sit hovering above the seat – you don’t need to. It could very well make a big mess on the seat and floor, cause you leg cramps, and doesn’t help protect you very much – if at all – from germs.

Seriously. If you’re not flushing, tell us why it’s so difficult to push down that handle. It’s the easiest quickest thing you’ll probably do all day. Easier and quicker than walking to the toilet, locking the door, pulling down your pants, taking a dump, and wiping up with all that extra toilet paper that you’re leaving in the bowl. You can’t take two seconds to flush? Why, why why? Curious and disgusted minds want to know.

Don’t Talk on the Phone

Have you ever been on an important call and realized that you needed to use the bathroom? Yeah, we all have. But that doesn’t mean you should take it into the public bathroom. In fact, the more important the call, the worse this scenario becomes. If you make the grave error of going into the restroom while you’re on that call, there’s a number of bodily sounds that could occur. At some point, you’re gonna have to un-mute. The person in the stall next to you is probably wondering whether they should flush the toilet, and the person on the phone is wondering what the heck all those sounds are!

If you need to continue sitting on the toilet for awhile longer, and there’s already some waste in the bowl, go ahead and give it a flush. You can flip that handle again later. This might be frowned upon by energy conservatives, but most people will agree that diminishing the smell with a mid-sit flush is worth it. Some might even say it improves public health. It’s also called a ‘courtesy flush’ for good reason. So let’s be courteous!

The public restroom is not private. That’s why it’s called public. So don’t bring your bestie or your employee in the bathroom and hash it all out in front of random strangers. They might actually not be strangers, and know who – or whatever you’re talking about. Save your confidential conversations – and gossip –  for a private (shall we say confidential?) space.

Do Wash Your Hands

If there’s one thing COVID taught us is that there’s almost nothing more important you can do to stop the spread of disease than washing your hands. The second most important thing is probably using a toilet. So do both. One after another. In fact, wash your hands before, and wash your hands after. And no need to rush it! With the Portland Loo, the sink is on the outside – so you have plenty of time to sing Happy Birthday and not feel rushed to get your hands clean. But if you’re in a multi-stall public restroom, be aware and efficient for other people that might be waiting for you to finish. A typical public restroom will have half as many sinks as stalls.

Don’t Knock on a Locked Door

It’s locked. Uuuhhhmmm so… what exactly is it that you’re unclear about? You’re just being annoying – and FYI you’re not gonna make ‘em pee any faster.

Don’t Choose a Stall Next To Someone Else

At least not if there are plenty of other options. Now this clearly isn’t a problem with the Portland Loo, but this is one of those unsaid rules of public restrooms. If you don’t abide by it, you might get a glare, stare, or snarl at the sink. Which, by the way, is also an unsaid ‘Don’t!’ I mean, who looks at complete strangers in the eye in a public restroom, right!?

If you need a durable and inexpensive solution for a standalone toilet that actually helps alleviate and prevent bad etiquette, the Portland Loo is a great bathroom solution for your school, park, transit stations, or other populated area. Contact us for more information and pricing!