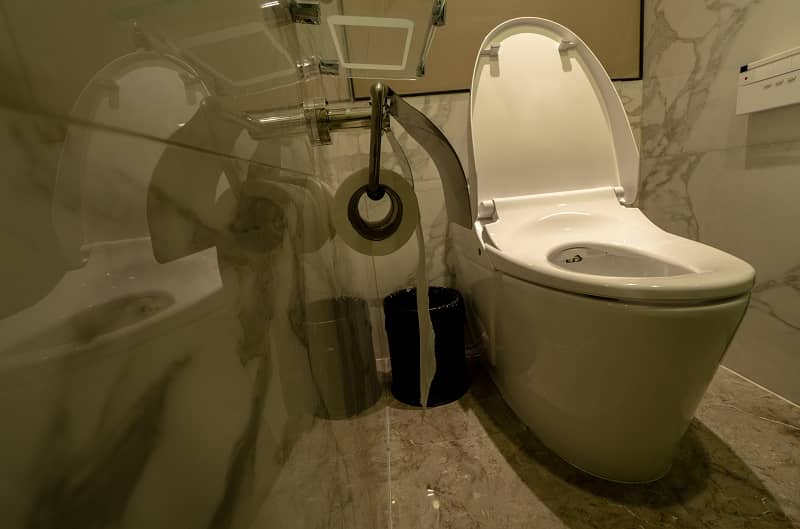 It wasn’t until the 16th century that Sir John Harrington – who was the godson of Elizabeth I – finally created the first flushing toilet! He made one for both himself and the Queen in 1592, but hardly anyone took notice because the smell was so bad. Later in 1775 a watchmaker by the name of Alexander Cummings made an s-shaped pipe for under the toilet, which helped the smell so that flushed toilets became more mainstream. The Portland Loo is proud to carry on that tradition and be an option that allows the public to use flushed toilets 24/7, because it truly helps keep any city cleaner and more disease-free. We are proud of our innovative design, and love to see the many amazing new toilet innovations every day. Many of them have made even further progress on eliminating the stench that comes with! Here’s some of the latest innovations in toilets that Sir John Harrington and Alexander Cummings would marvel at today:

KOHLER Konnect has created the Numi 2.0 intelligent toilet which allows users to customize it’s colored surround lighting, Bluetooth® music sync, and a heated seat. Oh, and did we mention it’s a bidet toilet too? This thing even lets you personalize the cleaning function, and has exceptional water efficiency too.  Plus hands-free control with built in connection to Amazon Alexa. Yes, they’re listening even while you’re in the bathroom.

Japan’s largest toilet manufacturer Toto is clearly committed to cleanliness and energy efficiency. Their new Tornado Flush System has a rimless bowl that uses a mere 1.28 gallons a flush, the same as Portland Loo. They also created a nano-technology glaze called Cefiontect, which seals the porcelain with a coating that is ionized and non-slippery, to repel mold, mildew, and other matter. Their current prized throne is the Neoriest NX1, which is an incredibly beautiful intelligent toilet inspired by pebbles that have been shaped in rushing water. It eliminates splashing and without any nooks or grooves, the design also prevents bacteria from collecting anywhere.

Charmin GoLab is a brand owned by Proctor & Gamble, and they have invented a called the SmellSense, which warns you in advance if there are bad smells in the bathroom! And they also have a new RollBot, which is a little robot on wheels that brings you a roll of toilet paper when you run out! But one of the more popular inventions is their V.I. Pee – which allows you a virtual view of the front row of a sports or concert event, so that you won’t miss the big play while you’re in the port-a-potty during the game.

The latest innovation from BioBidet could be the most affordable smart toilet on the market. It’s got a wider seat, which gives you more comfort and also the bidet nozzle can be adjusted to fit your own body (or bum) so that you get as clean as possible! And if you’re one of those that forgets to put the seat down, it does it for you automatically. It also adjusts the flush size to the amount needed after you do your business, so that you don’t waste water! And probably the best part is that it has a built-in deodorizer filter that gets rid of the smell.

The Veil is a one-piece tankless toilet with an elongated bowl, giving it an has an elegant minimalistic look. It uses a wall-mounted touchscreen LCD to control the toilet’s features, which means you don’t have to worry about losing a wireless remote or look for buttons that are located behind you while sitting on the toilet. The LED lights give it a nice look without being too obnoxiously flashy, and also work well as a night light. It also uses as low as .8 gallons per flush – or a full flush is only 1.28 GPF. You will need to make sure that your plumbing has good water pressure for it to work properly, but it’s one of the best smart bidet toilets you can find.

While The Portland Loo may not include the intelligent bidet toilets like those listed here, we do have an innovative award-winning design that will keep your schools, parks, transit stations, or other city areas clean and crime-free. We use in the Loo tough durable features. The toilet uses 1.28 gal per flush (very low for the industry), standard freeze protection rated to 9 degrees Fahrenheit (Can go lower with our optional cold weather toilet rated for -24F). Very durable stainless steel prison rated toilet. Our prefabricated bathroom solution that’s proven to stand the test of time, and will fit just about anywhere. Contact us to get pricing and find out more!