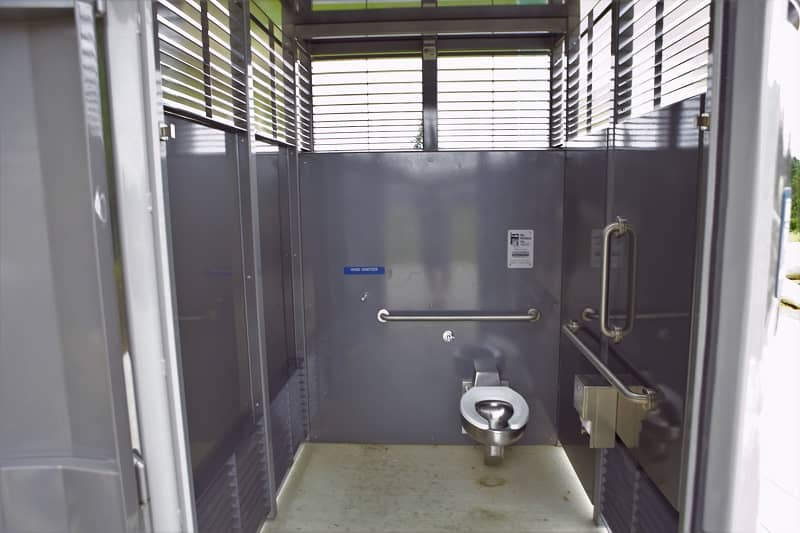 Transit managers are in charge of making it as smooth and easy as possible for people to get from Point A to Point B. This includes making it possible for people to “go” while in transition. As any transit official knows, that’s much easier said than done. Most public restroom designs lead to greater costs, worse headaches, and more hassles for transit managers. The Portland Loo is the exception to this seemingly unbreakable rule. It’s the best restroom for creating comfortable, clean, and accommodating transit stations.

Transit managers understand the struggles of their city better than most people. These experts are constantly trying to find ways to accommodate the needs of the entire city while combatting the unpleasant realities of criminal behavior. While most public restrooms become hotbeds for seedy activity, the Portland Loo is uniquely designed to deter crime. Grafitti-resistant walls fight against vandalism, blue lights deter intravenous drug use, and the grated design limits the downsides of too much privacy. The Loo makes it possible for transit managers to give the public a place to “go” while limiting delinquency.

It’s challenging for transit managers to find amenities that can meet the demand of the public while surviving the constant (not so light) use from tens of thousands or even millions of commuters. Unfortunately, public restrooms usually bear the brunt of the public’s misuse. The Loo sets itself apart from the competition with a virtually indestructible build. It’s designed with incredibly durable stainless steel which can withstand even the most abusive use. The Loo was built to endure anything and everything that the city can throw at it. Without exaggeration, this public restroom can last for over 100 years.

There’s a fine line between amenities that are accommodating to individuals and others that are sustainable for public use. Many traditional public restrooms simply offer too much comfort and privacy which can lead to misuse. On the other hand, the Loo was specifically designed to strike the perfect balance between privacy and safety. The grated design and open bottom provide users with sufficient privacy while still allowing transit managers, transit security, and other officials to see how many people are inside. This way, inappropriate activity can get stopped immediately.

The Loo is actually used.

The Loo isn’t just some newfangled concept or theoretical idea. Dozens of transit systems across the country (and beyond) have adopted this modern public restroom solution because of its effectiveness. Transit managers don’t have the option to gamble on public restrooms that might get the job done. These officials have to put the limited city budget to good use. The Portland Loo has a proven track record of success in some of the country’s largest, busiest, and most populous cities such as New York, Los Angeles, and Denver. Transit managers have already seen the benefits of the Loo, and you can too!

Maintenance is simple and cheap.

As a transit manager, you know first-hand just how much damage can befall public amenities when being used on a daily basis by commuters. Even proper and careful use eventually results in some kind of deterioration. At least that’s the rule for conventional public restrooms. However, the Loo stands apart since it’s the first facility specifically designed for maintenance. It’s built with easy-to-source and highly affordable parts, making it easier for transit managers to fix on the off-chance that repairs are needed. Plus, each piece simply attaches and detaches like a lego set.

Interested in learning more about the Portland Loo and why it stands out among traditional public restrooms? Feel free to contact the Loo team. We’ll be more than happy to answer all your questions. We look forward to hearing from you!