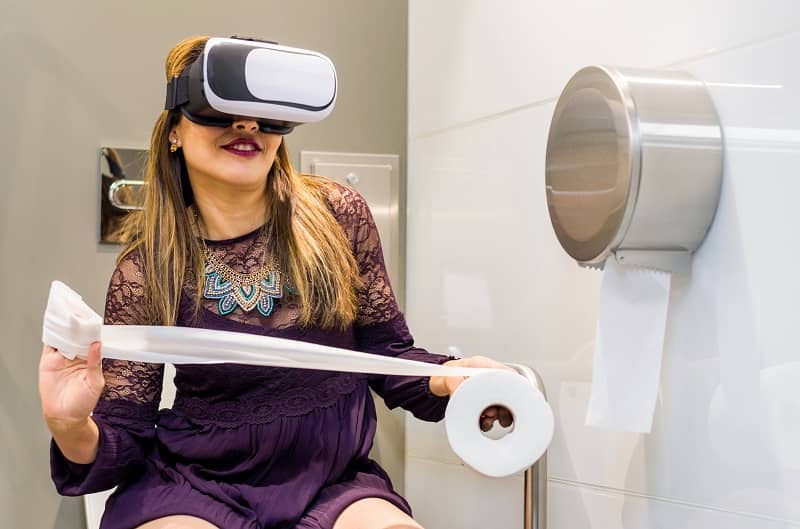 As most comedians know, potty humor will always get a good laugh, and we here at The Portland Loo have pretty much heard it all at this point! It’s such a universal thing to joke about, it’s natural that people of all ages have an appreciation for potty humor. That’s why we thought it would be fun to show you our favorite funny movie scenes that feature the toilet prominently:

In this hilarious scene, international spy Austin Powers (played by Mike Myers) is attacked by an assassin in the bathroom, and manages to kill his assailant by drowning him in the toilet. The situation is made funnier because the cowboy in the next stall over thinks that he’s just struggling to go #2.

While shopping for bridesmaid dresses, food poisoning from lunch hits the bridal party all at the same time. The bridesmaids rush to fight for the toilet at once, and Megan (played by Melissa McCarthy) resorts to using the sink. Meanwhile the bride (played by Maya Rudolph) tries to make it across the street, but ends up just sitting down to do her business right under the designer wedding dress in the middle of the road.

In this all-time classic comedy, Harry (played by Jeff Daniels) seems to steal his best friend Lloyd’s girlfriend. So then Lloyd (played by Jim Carry) puts laxatives in his drink to get revenge before Harry goes on a date with her, Harry runs to the bathroom as the laxatives take effect, and she knocks on the door to warn him – too late – that he shouldn’t use the toilet, as it’s broken.

Before prom, Ted (played by Ben Stiller) excuses himself to take a leak, and is caught peeping out the window at his date Mary (played by Cameron Diaz) getting dressed. In a fit of embarrassment, he quickly zips up his pants but catches his wiener is his zipper. After screaming out in pain, several people – including Mary’s dad (a police officer) and neighbor fireman – come to inspect and help, ultimately mutilating his ‘frank and beans’ even more.

In this iconic sci-fi movie scene, the audience watches Ian (played by Jeff Goldbloom) running from a Tyrannosaurus Rex, who chases him until he throws a light stick away to bait the creature to chase. The T-Rex runs after it towards a shack of a bathroom outhouse that collapses around a poor schmuck on the toilet inside, and the dinosaur eats him alive. Okay okay, you might not call this a “funny” scene, but then you might not have the sick sense of humor we do.

We hoped you got a laugh at our expense. But, no joke, the Portland Loo an easy ready-to-go solution for any city or organization that needs to provide clean, accessible, gender-free public restrooms. Contact us for more details and pricing, we’ll be happy to go over the specs and other details with you.